Here in Tampa, Gasparilla is a huge annual event, a tradition where the City of Tampa is invaded by thirsty pirates. There are many opportunities to photograph Gasparilla, from the pirate ship invasion to the parade, where more than a hundred thousand people flood the streets of Tampa. In 2016, I happened to get lucky, being in the right place at the right time to capture the essence of Gasparilla. To date, this image has been my most collected pieces of art. Here’s how I shot it. 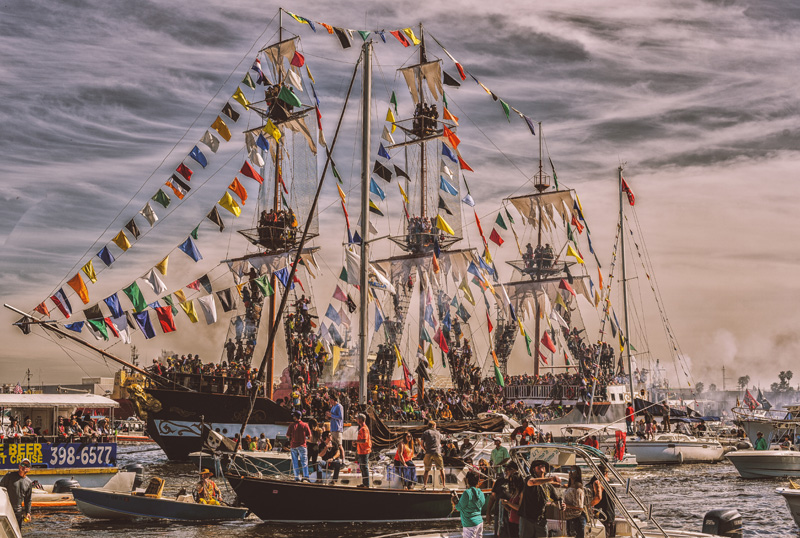 On the morning of Gasparilla, thousands of people gather along the Garrison Channel waterfront on Davis Islands, where I was born and raised. I use this advantage to arrive early, scout out where I want to be for the invasion. I arrive a couple of hours early, to make sure my staked out spot has not been moved, so I may get in position…then I wait, for 2-3 hours until you can see the “Jose Gaspar” ship far in the distance as it makes its way to Downtown Tampa. The pirate ship is loaded to the gills with pirates, from top to bottom, from stern to bow, pirates, ready to pillage, cannons firing off blank shells…it really is a sight to see. As it approaches, I climb down on the rocks from the seawall, getting as close as I can to water level. There are hundreds of boats surrounding the pirate ship, many launching water balloons, firing water guns and launching beads at those on the shore. I was hoping for a clear shot of the Jose Gaspar and this is what I got, a capture that really depicts Gasparilla.

Once back at the studio, I made some adjustments to the image, increasing contrast in the clouds, bringing out the detail, blending 3 images together, similar to an HDR blending method, just not overdone. I used some creative color mixes to give it the final look and feel. I am thankful this image has resonated with people here in Tampa. I have sold it 5 times to individual collectors and have created 2 custom prints for local businesses.

As a photographer, this is the ultimate goal of mine, to create something so unique the demand for it grows over time, thus increasing it’s value and desirability. It means even more to me being a Tampa native, with many family members and friends who are a part of the Gasparilla Ye’ Mystic Crew.