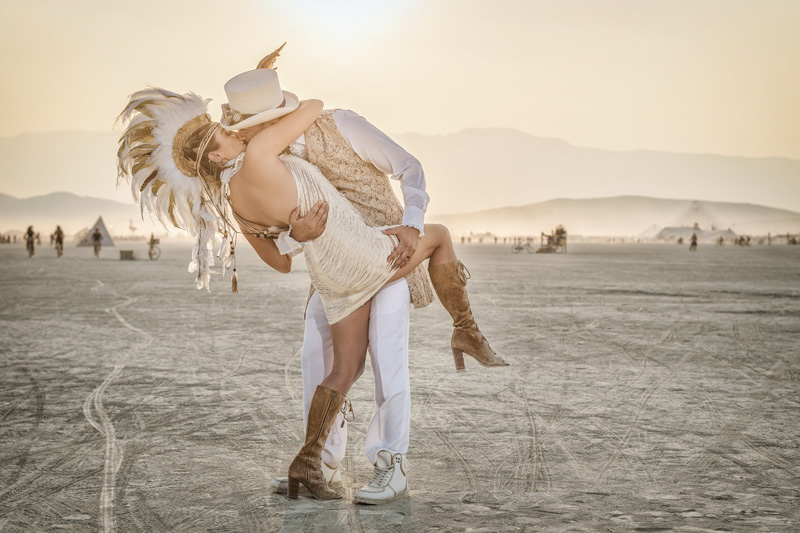 This image of Roni and Bret was captured at Burning Man in 2017, just after their Playa wedding ceremony. To date, it is one of my favorite images I have created, mostly due to everything that went into creating it and who the subjects are. Their story is an inspirational one of finding true love, two souls finding each other and connecting in a place which only exists for seven days each year.

Roni and I have known each other since high school. Believe it or not, we went to a homecoming dance together here in Tampa. Roni has been attending Burning Man for several years, prior to me even learning about it. After watching SPARK on YouTube, I was determined to attend my first Burning Man. So I started planning the cross country journey, packing my gear and doing my best to prepare. After 3,000 miles of driving, thousands of dollars spent on travel, gear, tickets, gas and hotels, I arrived at Burning Man, wide eyed and hopefully ready for whatever may come my way…I was totally not ready! A little more about that later on in this story.

It was during the 2016 Burn, that Roni and Bret met. In an instant, they formed an undeniable bond, gazing into each other’s eyes, into each other’s souls…they spent the rest of the Burn side by side, hand in hand. In the default world, Bret lived in California, Roni lived in Tampa. Yet, they formed a connection so strong, the 2800 miles between them was no obstacle for their love, each making trips and traveling together, their love endured and Bret proposed to Roni.

It’s now 2017 and the engaged couple is returning to Burning Man, where they would celebrate their love and share it with their friends, and even complete strangers. Radical inclusion is one of the 10 Burning Man principals, so everyone is welcome everywhere. Roni and Bret had planned a beautiful Playa wedding ceremony for Thursday, just before sunset. The gathering positioned so the Temple, a beacon of love and compassion would be in the background. The slideshow features images from their wedding ceremony. Only fitting my first time photographing a wedding would take place in the middle of the desert. Not a dollar exchanged hands, only hugs, laughs, tears of joy and memories were shared.

Burning Man is notoriously known as a harsh environment, where dust storms, white outs and 95+ degree weather can make life on the Playa rather daunting. This was my second time attending Burning Man, so I felt a bit more comfortable handling the conditions. I can’t say the same for my first Burn, the year before in 2016. Burning Man was (and is) an eye-popping, mind blowing, culture shock of a journey for me. I had never experienced anything like it before in my sheltered 38 years of living. An entire city filled with art, culture and music, built from the ground up, entirely constructed by the 70,000+ in attendance, including dedicated teams of volunteers and build crews. A cultural experiment unlike any other which lasts for 7 days, then dissolves until the next year, where the lessons, memories, connections and special moments live on in the default world, changing you forever. It’s my intention, photographing at Burning Man to capture this “human transformation”. I look forward to sharing more stories like this one.

Here are some technical facts about the image.

Here’s a shot of Roni and I after the ceremony. Such an honor to capture this special moment between two wonderful people. May the love the share for each other bring a smile to your face and warmth to your heart. 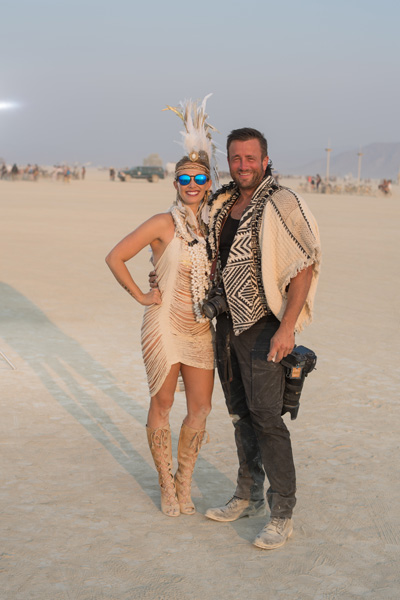